Q: How does Secure Erase work?

A: Secure Erase is a feature on many modern hard drives (greater than 15GB). This feature is activated by a low level command to the drive and causes the drive to erase itself using methods developed by the drive manufacturers in conjunction with the NSA. To protect against malware attacks, operating systems such as Windows and Mac OS (an software applications written for these operating systems) cannot send this command, but 4Secure erase can.

Secure Erase sequentially overwrites the data on the drive, similar to 4Secure erase’s other erase modes. However, Secure Erase better handles data on “bad blocks” (single pass may stop and report and error at a bad block).

Q: How fast will 4Secure erase erase the data on my drive?

A: 4Secure erase can erase modern hard drives at up to 7GB/minute or more. The erasure time depends on several factors. Older drives will generally take longer than newer ones. Higher levels of verification will not affect the time spent erasing, but will make the total process take longer. Finally, the erase mode plays a role. Quick Erase will generally finish a little faster than Secure Erase.

Q: With what drive capacities is 4Secure erase compatible?

Q: Do I have to jumper my IDE-drive to a particular setting?

A: We recommend that you jumper your IDE/PATA hard drives to a MASTER setting. Some hard drives have two different MASTER settings: one for when there is a SLAVE drive present and one for when there is NO SLAVE drive present. Choose the setting for NO SLAVE present. There may be some drives that will not work with either of these settings. The next choice is CABLE SELECT. If this does not work, try using NO jumpers. This may be the same as MASTER with NO SLAVE present.

Q: What kind of printer should I use with 4Secure erase?

A: 4Secure erase was tested primarily with Zebra brand printers compatible with ZPL II formatted text (often indicated by -Z at the end of the model number). During development we made every effort to make this feature as compatible as possible, but no list of compatible printers is currently being published. If choosing  new printer, the Zebra product line is a good starting point. Feel free to contact 4Secure for up-to-date information about 4Secure erase and serial printers.

Q: What kind of cable do I need for the Printer Port?

A: The printer port is a standard 9-pin serial RS-232 port. 4Secure erase requires a male end and most printers also require a male end. If you need to source a new cable, what you need is probably a “Male to Male RS-232 (DB9) Null Modem Serial cable.” Check your printer’s documentation regarding serial cable types. Connecting it to a computer’s serial port is possible with a “Male to Female RS-232 (DB9) Null modem serial cable”.

Q: What information is included on each label that 4Secure erase prints? 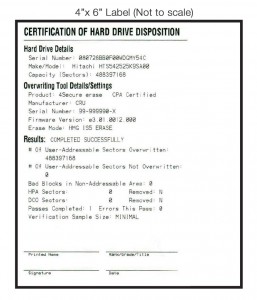 A: See the example.

Q: Why does the USB connector look like USB 3.0 but the documentation says it’s USB 2.0?

A: 4Secure erase uses a USB 3.0 style connector because it shares a form factor and many parts with another product. However, the controller chip that drives 4Secure erase’s USB connection supports USB 2.0 only. The port can be used with either USB 2.0 or 3.0 type cables and with either USB 2.0 or 3.0 hosts, but it will operate at USB 2.0 speed. The intended purposes of the port are the previewing of a drive and firmware upgrading, rather than for lengthy data transfers. For these two purposes USB 2.0 speed is sufficient.

Q: Can I switch drives or attach a hard drive when the unit is turned on?

A:  This is not recommended, because it could cause an electrical short that could damage the 4Secure erase or the drive.

A: Short answer: SSDs erased by 4Secure erase in any mode would be safe from casual data retrieval attempts, but for very sensitive data the only way to guarantee security is to physically destroy the drive.

Longer answer: With SSDs, the host (such a computer or 4Secure erase) does not have direct access to the sectors on the drive. There is therefore no way to guarantee that a command to erase a given sector will actually erase that sector.

The SSD’s controller may instead remap that physical sector to a new logical sector, leaving the data intact but inaccessible. Even a full overwrite of a SSD may therefore not result in a fully wiped drive. However, the data remaining on the drive would not be accessible via normal means.

Recovering such data would require removing the actual flash chips from the SSD’s circuit board and accessing them with special equipment and software tools. Secure Erase modes offer the best chance of fully erasing an SSD because they use the drive’s built-in erasing function. Secure Erase is defined by the ATA specification and requires drives to fully erase all user accessible data areas when the command is received. The Enhanced version also erases any data within HPA or DCO areas. However, at least one study has shown that some SSD manufacturers did not correctly follow at least this portion of the ATA specification. So while some SSDs will be erased fully by Secure Erase, others may not. If you know that a particular SSD model correctly implements Secure Erase modes per the ATA spec, these modes can erase the SSD completely. If you’re unsure you should assume that data fragments could remain.

Q: Can I output the erasure results to a PC?

Yes. Using the DB9 null-modem serial cable you can connect to any PC that has a compatible serial port.  Through this connection any operator using a terminal emulator such as PuTTY will receive the selected output profile via a COM Port, as defined by their PC. The output is readable but contains superfluous ZPL II text, but can be converted using various utility tools.

GET YOUR 4-SECURE ERASE TODAY

By continuing to use the site, you agree to the use of cookies. more information